Through Moving Day® grants, the foundation funded a study analyzing improvisational (also known as improv) humor as an effective therapy for Parkinson’s. The study, conducted by the Northwestern University Movement Disorders Center, a Center of Excellence, recruited 22 participants — men and women spanning in different ages and stages of PD. Caregivers also attended. For 12 weeks, nearly every participant attended a weekly, 60-minute improv class ready to laugh and perform.

“Parkinson’s is a multisystem disorder that affects physical, psychological and social well-being,” Dr. Bega said. “It’s difficult to see some patients only treating their motor symptoms with medication, but ignoring the mental symptoms.”

Dr. Bega and his colleagues worked with Second City® improv to create a specialized class that focused on addressing PD symptoms like anxiety, depression, memory and speech. At first, participants warmed up by introducing themselves with their name and a physical movement that represented themselves. some attendees immediately used the opportunity to showcase their vibrant sense of humor.

Next came memory games, like throwing invisible balls of different colors to one another, while remembering who was holding which color. After several weeks, the class advanced to full-on improv comedy. Together, with the two comedy instructors, participants took turns acting scenes, calling scenarios to keep the story going, but most importantly keeping each other laughing.

For his study, Dr. Bega was surprised to see attendance rates stay nearly perfect for all 12 weeks — a feat in the clinical research world. Each week attendees felt happier and looked forward to attending class. “Through improvisation comedy we saw significant improvements in daily living,” Dr. Bega said.

As a researcher, Dr. Bega would like to see the study conducted in larger numbers. If the findings are duplicated, he would one day like to see improv comedy added to weekly treatment regimens for people with PD. He was thrilled to see attendees develop a tight-knit bond among themselves, some even staying after class to form a support group.

One attendee developed speech problems and facial masking due to his Parkinson’s, but performing improv comedy instantly boosted his mood and reminded him how phenomenal it felt to make people smile. 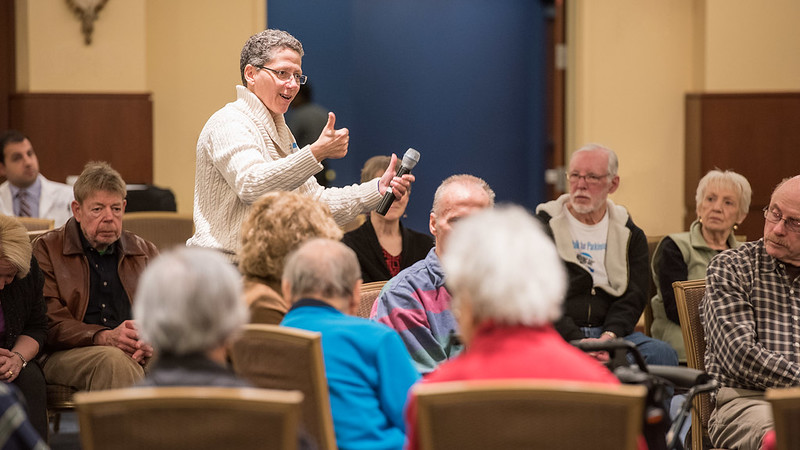 Help Us Make a Difference

We need your help – more than ever – in helping us raise awareness to beat Parkinson's disease and ensuring a better future, today.

This site uses cookies to ensure you get the best experience. By clicking "Allow", you agree to the storing of cookies on your device to enhance site navigation, analyze site usage and assist in our marketing efforts.

Subscribe here to get the latest news on treatments, research and other updates.